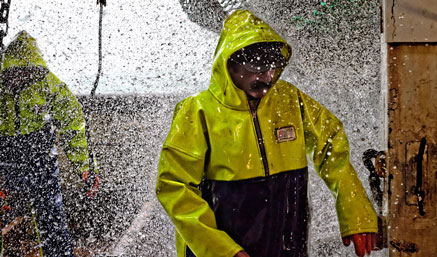 We’d be lying if we said it wasn’t a pretty controversial topic.

Last month, the team at Stormline carried out a survey to see what folk in the fishing industry thought about ‘hipster’ fishing fashion. Maybe you know what we’re talking about already. Think designer oilskins and chic water-proof braces. Strategic woolen hats. All the stuff you took for granted as day-to-day wear, now happily adorned by the young and fashionable.

So we decided to ask around and see what peers in our industry thought.

And guess what? The results were pretty surprising.

Most fishermen, on average, disapprove

Out of our chosen sample, over half (52%) of fishermen told us they didn’t approve of commercial fishing gear for fashion.

Some of the answers were pretty interesting too. It varied from some seeing the trend as ‘patronising’, to others believing that it wasn’t fair for young fashionistas to don a uniform they didn’t earn the right to wear.

It’s not all ideological, though. One respondent simply said they didn’t think commercial fishing gear looked good. We assume they weren’t talking about us, of course.

Approval varies from country to country

The other results from our survey suggested these opinions varied, however, from country to country.

Despite the worldwide average, South Africa (70%) and Ireland (61%) had amongst the biggest disapproval rates. It was in fact Australia (54%) and New Zealand (50%) that closely mirrored the international average more so than any other countries.

Britain and Canada lead the way

But it’s not all bleak. Take Britain, for example. Only 46% of surveyed British fishermen said they disapproved of this fashion trend. The news was even better in Canada with only 30% of fishermen expressing their distaste.

So what made Britain and Canada so different?

According to our feedback, one of the main reasons fishermen supported this fashion is because it arguably promotes the commercial fishing industry. Like a walking billboard, so to speak. Another reason is that it makes this fishing lifestyle seem like a positive one to young people – helping to potentially encourage and inspire the next generation.

At Stormline, we’ve always taken the time and attention to make sure our clothing doesn’t just perform well but looks good at the same time. So we’re in two minds about this fashion trend, really. Although young people might not need fishing oilskins to pop down to the shops, it’s still fantastic to see our industry getting the prop up it deserves.

More than anything else, we’re also excited to see if this clothing style helps to bring the fishing industry to the forefront of young people’s minds. Surely that’s never a bad thing.