We attended the Pacific Marine Expo recently in Seattle, where we had a booth with our Sales Director, Regan McMillan and our Canadian West Coast distributor, Allen Reid from Tidal Enterprises. The show is generally a good reflection of the health of the fishing industry and this year it seems the industry has done well. Fish prices have been higher and vendors noted that deals were being done at the show and both the number of vendors and indeed visitors appeared to be higher this year. The interest in Stormline foul weather gear was very pleasing, with expressions of interest from as far afield as Mexico and promising opportunities in California and Dutch Harbour. This was also the first year that our Canadian West Coast distributor joined us, which served for a few good laughs (and some great dinners), but also allowed us to get feedback from our end users. It was great to hear some great stories, from the chap who has used the same set for 10 years to new users who really loved the rain gear. And as always it was great to ctach up with other dealers, such as John Reardon from Hercules SLR in New Bedford, Massachusetts and Xzalivar White from Net-Systems in Seattle. 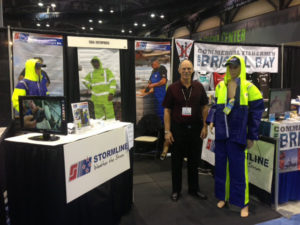