The UK skills gap is a complex issue, especially when it comes to the matter of filling it. We recently conducted a study to see how familiar people are with the specific jobs that make up the skills gap. But instead of conducting a simple poll (yes we love polls), we made a game of it. We showed people a selection of job titles – some real and in-demand, others taken from sci-fi films, to see if they could tell which was which.

See the results or take the quiz for yourself. The results of the study were published far and wide, notably in The Telegraph and City AM to name a few.

We’ve done some more number crunching, this time to see exactly what jobs and skills the British public think we’re lacking. It’s safe to say, perceptions and reality don’t really match. Perhaps that is one of the biggest problems facing our economy. If people aren’t aware that we need dancers and designers as well as engineers, we’re missing a chance to attract people into the relevant areas of study.

Our study asked 1,000 UK adults to select from a list of occupations which they believed were most in-demand. Interestingly, teaching generally was considered to be the most in-demand occupation, despite being a fairly well occupied profession, with only chemistry and maths teachers being listed on the Home Office website as in-demand.

Participants also believed professionals in social work, armed forces, I.T and local government were in-demand, despite the UK having no immediate shortage of any.

Engineering, health, waste management, visual design and contemporary dance were not identified in significant numbers, despite being the top in-demand occupations.

We also looked a bit further along the skills pipeline, to find out who will be filling the skills gap in the short to medium term.

Based on numbers of students pursuing relevant subjects at A and AS level, boys are more likely than girls to enter engineering professions, the sector with the largest immediate need for personnel. Girls will be represented in slightly higher numbers than boys in health care.

One of our past studies, which examined barriers to participation in so-called male dominated industries, suggested that fear of ‘macho’ work environments was one of the main reasons sectors such as engineering and waste management had an under-representation of females. 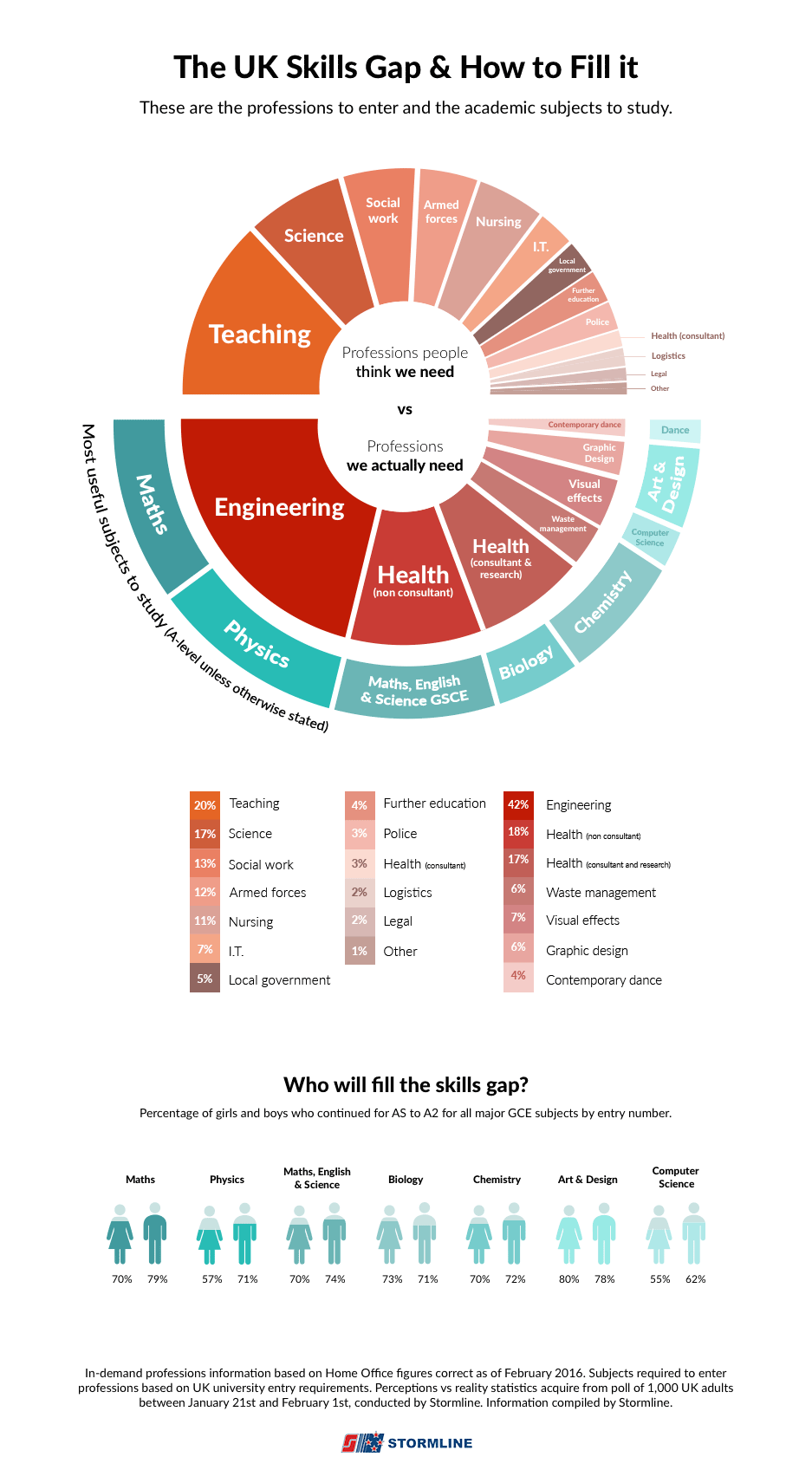 How we got our data

Academic subjects: This information was based on entry requirements to study the relevant subjects at degree level. We gathered our data from the UCAS website and websites of more than 100 British universities.

Understanding of skills gap: This information was taken from a poll of 1,009 UK adults, between the dates of January 21st and February 1st 2016.